I had the great pleasure of meeting percussionist Reynaliz Herrera by pure chance in 2010. We made friends playing horseshoes at a barbecue near Fresh Pond and have stayed in touch ever since. Reynaliz is a creative spirit who inspires me to be my most genuine self. One of my favorite things to do in Boston is to bike to her apartment with a bag full of groceries, make dinner, and talk about John Cage.

“The plan is, there is no plan,” Reynaliz is fond of saying, “except to follow the things that I love.” And the world is better for her passion––Reynaliz approaches music making with the kind of fire that makes the world spin.

Here are two examples of that energy from her most recent composition and production, IDEAS, NOT THEORIES. The show explores the use of bicycles, tap, body percussion, water, marimbas, and drums.

What inspired you to start doing percussion? When did it happen?

At the age of twelve I suddenly became obsessed with the idea of becoming a singer and forming a band. However, I did not know how to play any instruments, sing, or read music. I had the idea that if I practiced by myself in my backyard using pots and pans, toy guitars and a fake microphone, that would make my dream come true. I would ask my sister (who didn’t know any music either) to be my bandmate. After a while of seeing this, my mom encouraged me to enter the Conservatory in Mexico. I attempted to do voice and I failed. My alternative was percussion and guitar. I took both and, in the end, percussion won my heart. Of course, I expanded from pots and pans to all the classical percussion instruments (marimba, xylophones, snare drums, timpani), world percussion (Congas, bongos, bata, etc.), and now, unconventional percussion, among them, bicycles.

Why do you make music?

Because I need to. I feel that being an artist is like being pregnant. When we express ourselves through art, music, words, etc., we give birth to whatever was inside. Music is my child.

What are you most proud of?

Of the ability to be genuine.

How did the idea for the Ideas Not Theories come about? What do you hope for people who listen to the piece?

Through my years in Music College people would ask me what my direction in music was going to be, I would always said I wanted to become a soloist, (it was the most concrete answer I could give), then they would ask what would exactly would I be doing, I would respond, “I don’t know I just want to be able to do my thing, whatever it is.” I knew I wanted to be myself, but I did not know what that was going to be like. I felt like people would want me to know what my “child” was going to be like, but I sort of knew I had to just let it come. Growing up, I played with my mother in her dance company in Mexico, she would inspire me to be creative and expand on using whatever I wanted to use. Later on at age sixteen I wrote my first two pieces of music, and continued writing. Ideas, Not Theories is the answer to those who asked me what exactly I wanted to do with music.

For people who listen to the piece I hope for them to just be open, and let the sound be an Idea, not a Theory.

What draws you to the bicycle as an instrument?

At first, it was necessity. The idea of playing on a bicycle came from going out to busk and not having a lot of instruments available. The bicycle was my solution. After I discovered I could do this, my inspiration was exploration: exploration of sound, movement and energy.

Anything can be a source of inspiration if you look at it the right way.

What is your favorite place on earth? 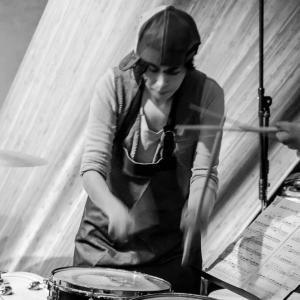 Reynaliz Herrera is a professional musician, percussionist, composer, and educator. She was born in Monterrey, Mexico in 1984, where she studied music at the Escuela Superior de Musica y Danza with maestro Noel Savon. Reynaliz has performed and collaborated with The National Arts Center Orchestra of Canada, The Ottawa Symphony Orchestra, The Orchestre de la Francophonie Canadienne, The Boston Conservatory Orchestra, Mexican Dance Group: Danza Contemporanea en Concierto, and The Boston Opera Collaborative. Her solo works have been featured internationally in the United States, Mexico, Cuba, Canada, Spain, Italy, and Germany, and she has collaborated with prestigious artists such as Bob Becker, Evelyn Glennie, Ian Bernard, Pinchas Zukerman, Peter Sadlo, and Gunter Schuller. Reynaliz has been marimba and percussion soloist several times with The National Arts Center Orchestra of Canada (One of them Broadcasted by CBC Radio Canada National wide), and recently made an appearance at the concert series “My first NAC” performing one of her recent compositions.

Reynaliz is currently working on her own music project “IDEAS, NOT THEORIES” ©, an original performance show of Reynaliz’s compositions that makes use of bicycles and body percussion and has been performed, to date, in Mexico, the US and Canada. She is also the drummer of the alternative Boston-based rock band, Muy Cansado, with whom she recently performed at the SXSW festival in Austin TX. Reynaliz also works as a percussion teacher in the Somerville public school system. She also teaches at the Hamilton-Garret Music Academy and offers private lessons.